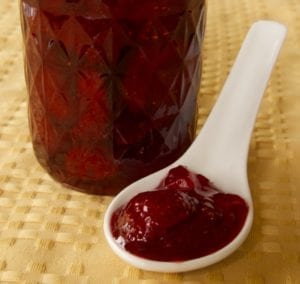 I heard a lot about this method last year, but it was after I had already made strawberry jam. Somehow it popped into my head as I pulled out the pectin last Saturday to start in on a batch of jam. I put the pectin away and did a quick Google search. I was a little shocked that I had trouble finding a recipe. For some reason 3 day potty training trended high up in the results list. I finally found this blog post: Strawberry Preserves.

The jam turned out amazing. I had purchased organic strawberries at the Grand Lake Farmer’s Market and they sure were pretty ones. This is by far the best strawberry jam I’ve ever had. Was it the strawberries, the method or both? Probably both. It’s a softish jam, but I could have made it thicker with further boiling.

My take on Jenn Martin’s recipe, which itself was her take on three sources:

2 1/2 punds of strawberries, which was three baskets at my market
4 cups of sugar
3 tablespoons of lemon juice
1 tablespoon of butter

Day 1:
Wash, hull and cut the strawberries into big chunks. Add sugar and lemon juice. Stir. Put it into a lidded non-reactive container and then into the fridge, stirring when you remember to, at least a couple of times.

Day 2:
In a large pot, boil the mixture for 3 minutes, adding butter to prevent foaming. Return to the container and put it back in the fridge.

Day 3:
Put jars and lids on to boil to sterilize them. You’ll need 4-5 twelve ounce jars.

Put a small plate in the freezer.

Strain the berries from syrup. Boil the syrup in a large pot until it reaches 220°F on candy thermometer. Which is approximately 3 minutes of rolling boil. Go a bit longer if you want a thicker jam.

Add the berries back in and boil again until it reaches 220°F. Test the set by putting a small amount on that cold plate from the freezer. Then put the plate back in the freezer. If it gels up, you’re set. If not boil a bit longer and re-test.

Ladle into the jars, affix lids and bands. Put them into a water bath and process for 5 minutes. Remove and wait for the pings of the lids sealing.