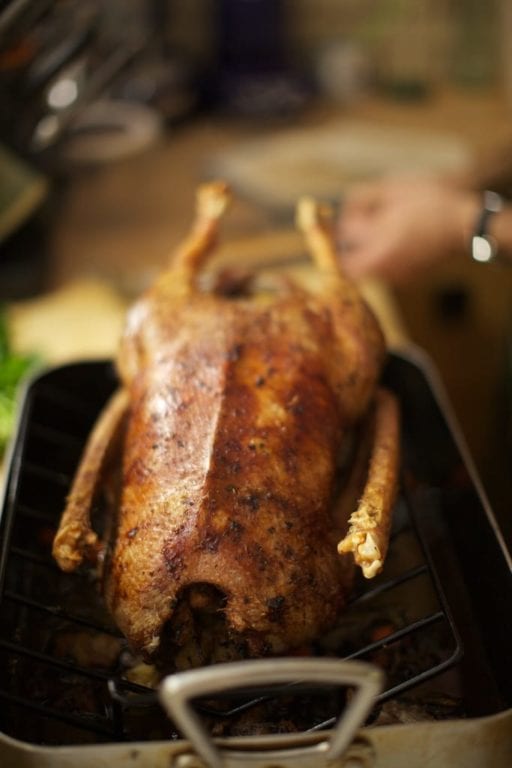 Last year I went completely nuts and cooked a six course Christmas dinner solely from Thomas Keller cookbooks, mostly The French Laundry Cookbook. I worked for days and days in the kitchen and pulled it off pretty well. There were minor glitches, but mostly everything was delicious.

This year I thought I’d take it easy on myself and cook mostly recipes I’ve very familiar with and some easily prepared the day before. So, last Friday I spent seven hours in the kitchen doing all kinds of prep work and assembling some dishes. For the most part everything worked out, but as always it was a frenzy to get each dish out on time. I had the brilliant idea to use my pizza stones, hot from the oven to keep the food warm. I leave them in the oven all the time and this worked out great.

We had gone to our CSA’s farm in November and picked out our turkey. It had been in the freezer since. Our December share was mostly made up of a goose. They were both small, so I cooked them both; the goose stuffed, the turkey “spatchcocked.” The later just means the backbone cut out and the turkey splayed out. It roasted in just an hour and fifteen minutes and was terrifically juicy. It turned out to be one of the best turkeys I’ve ever made and it has to be the easiest. I used Tyler Florence’s recipe that he did on the Today Show.

Dessert was an assortment of cookies, Caramel Pumpkin Pie & Pecan Pie. However, not much dessert was eaten as everyone was so full.

I was very happy with how everything turned out but found it almost as stressful as last year. It’s harder to get a bunch of dishes out at the same time than to do six courses, each in their time.

These wonderful photos are courtesy of Howard’s nephew Josh. The full compliment of the day’s pictures can be found here.