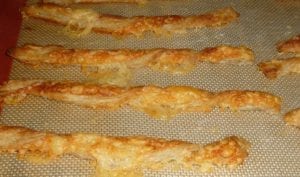 I’ve seen several chefs on television make ‘quick puff pastry’, but for some reason I’ve never tried it myself. I was always worried that it would end up far inferior to the frozen stuff at the grocery store. A few months ago Martha Stewart had chef Nick Malgieri on her show and he made Food Processor Quick Puff Pastry. I printed out the recipe right away and it’s been in my stack of things to try since.

With our Mardi Gras Party on the horizon I thought it a good time to try out the recipe. I followed it to the letter and worried about how the dough looked, but just stuck it in the refrigerator and hoped for the best. The next day I made a very small batch of cheddar cheese straws to test it out. Looking in during baking I was ready to declare them a disaster, but in the end they were quite delicious and flaky.

I made a bunch of them for the party and they all disappeared. I still had some dough reserved though and we’re having friends for cocktails this afternoon, so I whipped up a fresh batch of cheese straws this afternoon. They’re the ones pictured above.
Cheddar Cheese Straws
Puff Pastry
White Cheddar Cheese finely grated

Sprinkle the puff pastry with some cheese before you roll it out. Roll it out pressing the cheese into the puff pastry. Cut into strips, twirl them up a little and put on a silpat or parchment lined baking sheet. Throw some more cheese over them if you like.

Substitute any cheese you want. Parmesan works great too.