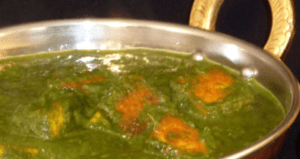 Chop the block of paneer into even bite sized pieces. In a bowl, mix the paneer pieces with the turmeric, chili powder and a teaspoon of salt and set aside.

Now, chop the onion roughly and mince or puree the ginger and garlic together. In a non-stick pot, bring the oil to heat over a high flame.

When it is hot, add in the paneer and fry on one side until golden brown and then flip over and repeat on the opposite side. Then remove it with a slotted spoon back into its bowl.

In the same oil, fry the onions, ginger and garlic next. When it starts going translucent, mix in the cumin and the chopped green chili. Fry for about five minutes until the mixture turns a deep golden brown.

Now mix in the frozen spinach and let it cook for another five minutes. When it is thoroughly defrosted in the pot and mixed evenly with the masala, add half a cup of hot water and go in with a hand blender to blend the whole lot into a smooth, creamy mixture.

If you don’t have a hand blender, you could tip the spinach into a normal blender for the same result. When it is smooth and back in the pot, add in the fried paneer pieces and the garam masala. Lower the heat and simmer for 10 minutes until the water dries up and the spices have penetrated the spinach thoroughly. Salt to taste. If it’s too bitter, add a tablespoon of sugar.